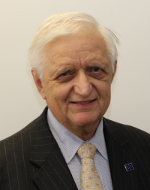 member of the Board of Directors

Dr. David C. Karlgaard has served as a technical contributor, manager and executive in the information sciences industry since 1968.

He began his professional career as an electrical engineer at several U.S. Government research laboratories from 1968 through 1975. He then worked as an electrical engineer and executive at Computer Sciences Corporation from 1976 through 1984. In 1985 he founded PEC Solutions, a government information technology services company. He took the company public in 2000 on the NASDAQ National Market and merged the company with Nortel Federal Solutions in June of 2005. He recently retired as Vice-Chairman of the Board of Directors of Nortel Government Solutions, a subsidiary of Nortel Networks.

Dr. Karlgaard previously served as Adjunct Professor at The George Washington University School of Engineering and Applied Sciences and at the Business School. He was a founding director of James Monroe Bank, a Northern Virginia publicly-traded community bank. He now serves on the Board of Directors of Freedom Bank of Virginia and on the Board of Trustees of George Washington University where he was recognized with an Outstanding Service Award and is a member of the GW Engineering Hall of Fame.

Dr. Karlgaard has been associated with the Professional Services Council, Northern Virginia Technology Council, American Electronics Association, and has served as President of the Washington Technology Fast 50 Council. He is active in a number of charitable organizations. He is married, with two grown children, has lived in the Northern Virginia area since 1968, and enjoys travel and an occasional round of golf.